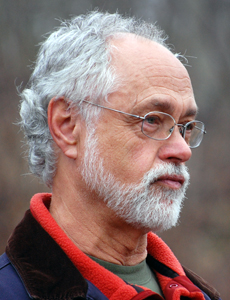 Dr T Allan Comp is an historian based in Washington, DC.

Jo Hanson, the pioneering public artist in San Francisco, once described Allan as "a relaxed blend of John Muir, John Dewey and John the Baptist." He holds a Ph.D in history, worked for several years in cultural resources with the National Park Service, left that to work as a developer of historic properties and consultant to historic preservation projects, and then to work for a regional Heritage Area in western Pennsylvania where he invented AMD&ART. Always a volunteer for AMD&ART, his work attracted the attention of other watershed and community improvement projects in the Appalachian coal country and in the Western hard rock mining country as well. Winner of multiple awards in partnerships and planning, Allan now leads the OSM/VISTA Team and Brownfields Initiatives at the Office of Surface Mining in the U.S. Department of the Interior.

"Science and the Arts in Environmental Reclamation" -- A Public Talk by T Allan Comp at George Mason University, Sponsored by EcoScience+Art.
A video of Allan's talk was recorded and is available on the EcoScience+Art web site.

"At least for me, the benefits of this collaborative advocacy go to both the community and the field. Environmental reclamation challenges all of us engaged in the field to broaden our constituency and offer the opportunity to reconnect the sciences and the arts. Good reclamation science alone is not simply sufficient. Particularly in places with significant public access or visibility, we need to address the underlying culture as much as the science. Art, history, design, the perspectives of literature, and much more can significantly improve the public understanding of, and commitment to, our work in environmental improvement; and it can enhance the nature of that response as well. Good design is more than a nice plan; it is also an opportunity for public engagement, even delight. Good history opens opportunities for better understanding of the origins of the contamination we seek to remediate, for greater reflection on the values and achievements of our predecessors and on our contemporary role in that continuum of history and environmental commitment. Equally important, engaging the arts and the sciences as necessary partners brings the depth and range of perspectives essential for expanding community interest in addressing critical needs in our national environmental patrimony. That is the most challenging — and rewarding — role for the artist as advocate in environmental reclamation." -- Dr. T Allan Comp

Headlands Center for the Arts, Sausalito, CA, February 22 – March 7, 2011
Creative Ecologies: A Group Residency + Public Conversation
Eight artists and creative thinkers from across the country who address the complex relationship between humans, cultural production, and the natural environment. As part of a new programming initiative exploring ways that residencies catalyze collaboration, participants spend two weeks in residence at Headlands leading up to the event, living, thinking, and working together.

Derek T. Dortch on Federal News Radio interviews Allan about his work, the OSM/VISTA Teams, and the Service To America Environment Medal which Allan won in 2009 for his work in Appalachian coal country and the isolated mining communities of the Mountain West. Listen here.

2009 Service to America Medal — Environment recipient
OSM/VISTA teams founder honored with Service to America Medal in the Environment. This is the first Medal ever awarded that includes National Service and only the second awarded to an Interior employee, the first in the Environment category. Often called the "Oscar" of federal service, the Medal recognizes Comp's outstanding contribution in building a network of volunteers to revitalize communities in Appalachian coal country and the Western Hardrock mining region to repair decades of environmental degradation. More »

Dr. T Allan Comp — Founder and Coordinator of the Appalachian Coal Country Watershed Team (ACCWT) and the Western Hardrock Watershed Team (WHWT) — named one of River Network's 2009 National River Heroes. "The award celebrates rivers and those who protect them by recognizing some of our victories and honoring those who provide us with leadership and inspiration along the way." Allan is the first federal employee to be named a national river hero. More »

See the profile on Allan by Eric Reece in Orion Magazine: Reclaiming a Toxic Legacy Through Art and Science

For a more technical approach, see Manufactured Soil Field Demonstration for Constructing Wetlands to Treat Acid Mine Drainage on Abandoned Mine Lands
U.S. Army Engineer Research and Development Center (ERDC) teamed with AMD&ART to restore an abandoned acid mine drainage site at Vintondale, PA into a recreational park and passive remediation facility

Current activity that grew out of AMD&ART